Raising funds to provide iPads for patients for a whole year! 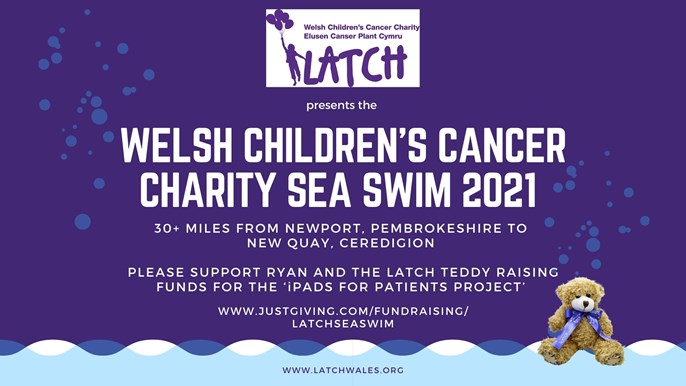 Ryan Davies, a Veterinary Surgeon from West Wales, is attempting a huge challenge of swimming 31.42 miles along the West Wales coast line from Newport, Pembrokeshire to New Quay, Ceredigion. The swim will be completed in 6 stages over the summer months – hopefully when the weather and water is a bit warmer!

Ryan is doing this challenge to raise vital funds on behalf of LATCH, with the aim of raising enough money to fund the purchase of a whole year’s supply of iPads for our patients at LATCH. Ryan has set his target high at £15,000!!! When we asked Ryan what his motivation was to take on this challenge and raise funds for the LATCH, he said “Having visited the Rainbow Ward and seen first-hand the fantastic work the team at LATCH do, and what a difference it makes to people’s lives, I felt compelled to do what I could to become involved and contribute”.

The coastline where Ryan will be completing the swim consists of some the most stunning views and scenery in Wales, and Ryan is hoping to showcase this as he will be equipped with his trusty GoPro. Keep an eye out as he will hopefully be joined by some dolphins on his way along the coast! 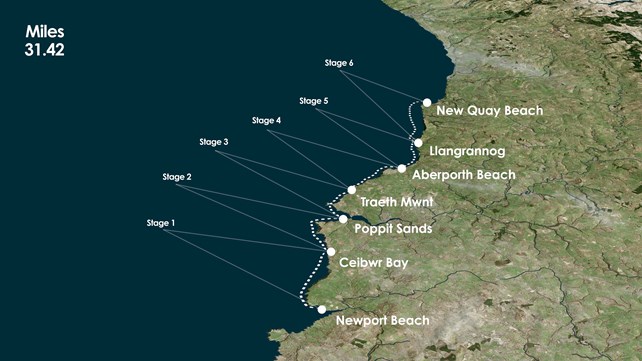 We asked Ryan how he was feeling about taking on such a big challenge, and he said “I honestly haven’t thought about it that much.  My goals are to achieve the target of a year’s supply of iPads for the children and to use what I believe to be one of the most beautiful parts of Wales to give LATCH the exposure they deserve - which will hopefully lead to further contributions to fund their other projects and services in the future”.

“I am hoping to complete the final stage and arrive on New Quay beach with the LATCH teddy on August Bank Holiday Sunday (29th) or Monday (30th) around lunchtime.”

Iwan Jones, LATCH General Manager, said “When Ryan first got in touch to discuss his plan to do a charity swim, I never thought he would be looking to take on such a big challenge – both physically and mentally. Ryan is clearly a very driven and ambitious person, the target total he is hoping to raise is huge, and will be a brilliant way to help us to continue to support our patients and families. The iPads for patients project started a few years ago and was so successful, we decided to continue it even once the project had officially ended. With Ryan’s help we will be able to continue this scheme even longer as we know just how useful and helpful it has been for our patients and their families.”

Iwan continued “I really look forward to watching Ryan’s progress, the videos he will make along the way and seeing him get to the end of the challenge. On behalf of LATCH I would like to say a huge thank you to Ryan for taking this challenge on and for his ambitious target. I’d like to wish him the best of luck in the next few months of training and the actual swim itself, and we’ll have everything crossed that he gets some nice warm weather and calm waters!” If you’d like to know more about the challenge and how you can keep up to date with his progress then please visit Ryan’s Just Giving page using the link below.