During the various lockdowns, Rosie Scribblah has been honing her skills as a painter by completing live tutorials, copying the work of some great artists. As the lockdowns dragged on, Rosie found herself with so many paintings, that she wanted to sell them to raise money for a cause close to her heart, and after helping a member of the family – Nathan - through their cancer treatment, she decided to raise funds for LATCH! 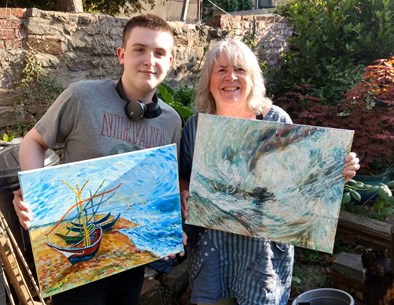 On February 22nd 2018, Nathan was diagnosed with Acute lymphoblastic Leukaemia and we were told he had 2 weeks left to live without treatment.

This is where LATCH became a massive part of our lives. As soon as Nathan was admitted to the ward, the Play Specialist came to visit us. She gave me and his dad some time alone to talk and sat with him and made him feel normal. When we returned, Nathan was beaming as he had been gifted an iPad to keep by LATCH. This was priceless at the time, it meant he could talk to his friends and family, play games, watch films and distract himself from what he was going through. Later that day we met our LATCH Social Worker who seemed to be literally sent from heaven when we most needed help.

She gently eased us into what was going to be our ‘NEW NORMAL’. Being in hospital for sometimes months on end can be really expensive. LATCH helped with that by providing a nightly allowance, they also helped with travel. Some weeks we had to drive from Swansea to Cardiff 4 times, they took

the pressure off funding that. Without LATCH in the first few months, I really don’t know how we would have got through.

They continue to provide financial support throughout the 3 and a half years of treatment, but more than that, they emotionally supported us. They always touched base when things were difficult and Nathan’s health declined. Our Social Worker visited us at home and boosted mine and Nathan’s spirits when needed. LATCH arranged days out with other families which was the only time you felt normal. They go above and beyond for each and every child and family member, arranging siblings’ days out so the other children feel special too.

Nathan has finished treatment now and he is doing well, he is starting college and getting his physical strength back and he feels strongly that he wants to give back to the charity because they helped him so much. LATCH isn’t just a charity it’s a family and we cannot thank them enough.

Nathan said “I’ve been going through chemotherapy for the past 3 and a half years and recently finished my treatment after a long journey. However, throughout my treatment LATCH have been immensely helpful in so may ways. They were always willing to chat, had Social Workers to help us get things we need and even offered gifts to boost spirits. Due to this, I’d really like to help in any way I can, so I’d really appreciate it if anyone were to buy a picture as LATCH have been incredibly helpful and caring towards all cancer patients and families.”

Rosie has set up a fundraising campaign to sell some of her art throughout September, with all proceeds going to LATCH, which can be found here: https://scribblah.co.uk/latch-the-childrens-cancer-charity-painting-fundraiser/

The link will take you to her page where you can view the art. If you decide you’d like to buy one then please follow these steps… 1. Send an e-mail to info@latchwales.org, stating the piece you’d like to buy and you details – Name, address, and please include ‘Artwork’ in your e-mail subject line.

2. We will then get in touch to arrange payment, and will inform Rosie to get the art ready to be delivered to you (providing you are happy for us to share your address with her)

3. Once we receive payment, Rosie will send the art to your address and we will send a letter of thanks as proof of your donation.

4. You will receive your artwork!

Once payment is received, we will do all we can to process this and get your painting to you as soon as we can. Please be aware, the LATCH team work between 8:30am – 5pm, Monday to Friday, please feel free to e-mail us at any time and you will get a response as soon as possible.

Artwork cannot be sent anywhere outside of the United Kingdom.

Rosie said “Seeing how much LATCH helped Nathan deal with his treatment reinforced how important the emotional side of it was. The community LATCH has built up amongst the children and their parents was a huge help to him and his whole family in some of the darkest times. The upbeat, friendly approach of the LATCH team and ward staff on treatment days made the visits much more bearable for him. All the treats large and small gave him something to look forward to but it was the attitude and support of the staff that really made the difference.”

We’d like to thank Rosie for her generosity and for doing this for LATCH – we are very grateful and hope the campaign goes well!