David Carroll, a teacher from Taffs Well, near Cardiff, donated over £500 from selling 400 of his children’s book entitled: Be Brave, Little Ant: Little Ant’s First Day at School, which was published originally in August 2021.  The story tells an inspiring tale about how one of the smallest of creatures, an ant, can be mighty enough to face his fears during his first day at school, thanks to the help of his kind teacher and friends.

David said: “I’m delighted to support LATCH in this way.  Writing children’s books has always been a dream for me. I choose to donate the funds to charity as I recognise the amazing work that charities do and I wanted to give something back in return. 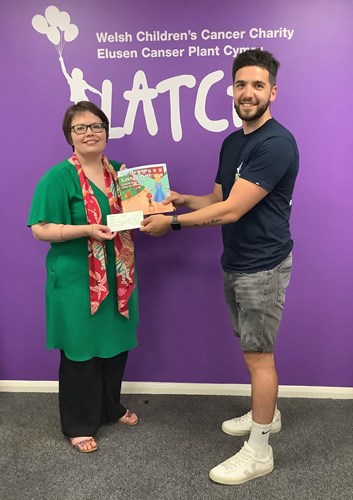 “I wanted to donate to a charity for children as the book is a children's book. The work that LATCH does is amazing and I really wanted to give the funds to the charity to help the brave children that LATCH supports every day. I was blown away when I visited the centre and Menai explained all the amazing work they do! They really do go above and beyond for the children and their families. I hope the donation helps the families who need it.”

David was inspired to write this book because he recognised that starting school can be a scary and daunting process for children and he wanted to help in some way.

This is the second book David has published in his Little Ant series. The first, Be Brave, Little Ant, was released in August 2020, the proceeds of which David also donated to charity.

David said: “Seeing the finished article is a proud moment and I hope it inspires and motivates children when they read all about Little Ant! The process of writing the story took me a good six months and I spent a long time with the illustrators ensuring the illustrations fully represent the story line.”

Menai Owen-Jones, interim Chief Executive of LATCH said: “Big thanks to David for his generosity and supporting LATCH in such a creative way.  His books are really engaging and colourful with heart-warming stories.  A donation of £500 like this makes a real difference to the families we support.  For example, we provide family financial grants to help with costs during a child’s cancer treatment and £500 can go towards a holiday grant for a family, who otherwise may otherwise not be able to afford a break away or a holiday.”

LATCH offers support services and accommodation for children and the families of those with cancer who are being treated by the Oncology Unity at the Children’s Hospital of WALES.